Since we've been working our way through a series of posts on St. Ignatius Brianchaninov's The Arena, this podcast from Fr. Thomas Hopko seemed pertinent. It is about 45 minutes long, but is very well worth the listen. He brings up a number of wonderful points regarding our own zeal for the Church and the spiritual life. One point in particular has inspired me to dig a little deeper in order to elaborate a bit more later on. But for now there is something that I wish to bring up and elaborate upon a bit.

In her book, Poustinia, the Servant of God Catherine Doherty mentions how for the first year of life as a new "poustinik" a solitary is only permitted to read the Bible. All other books are banned at least until after the first year. This has always bothered me a bit. What about the Fathers? What about the liturgical texts of our Church? What about the great wisdom contained in such books as the Philokalia, or The Arena, or other classics of Eastern and Western spirituality. As a lover of books it deeply bothered me that only one book would be permitted in the poustinia.


After listening to this podcast by Fr. Tom I was struck by the wisdom of "the Baroness," as Catherine Doherty is sometimes affectionately called. Not only was her command for newcomers to her "lay apostolate" completely in line with what Fathers like St. Ignatius taught, but it also encourages a way of life that is rooted first in the commands of the Gospel, and then in those same commands as elaborated by the Fathers. It is first necessary to establish the deep roots before the tree can grow and bear fruit, otherwise the first storm that passes will uproot the tree before it has a chance to mature.

I felt challenged by this podcast to deepen my own study of the Scriptures, a study which is admittedly lacking on my part. If, as St. Jerome mentions, ignorance of Scripture is ignorance of Christ, then we ought to be zealous to correct any ignorance of the Gospel so as to come to know Christ more deeply. May heaven consume us.
Posted by Phillip Rolfes at 8:48 AM No comments:

I have a number of prayer ropes that are available for purchase and immediate shipment. NO WAITLIST!!! Normally I'm backed up with a couple months' worth of orders, so this is a little unusual for me. So if anyone's looking for a good prayer rope (albeit in some unusual colors), look no further. :) 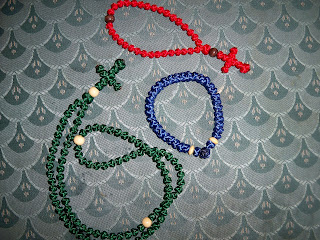 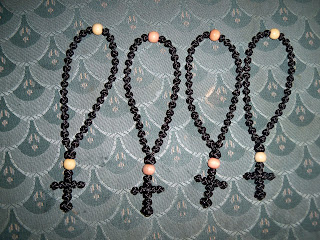 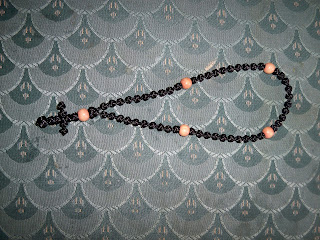 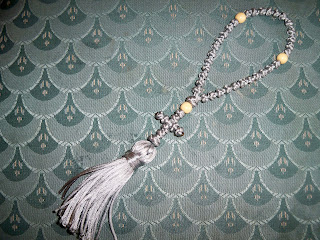 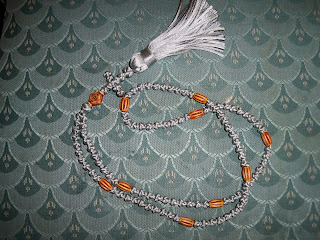 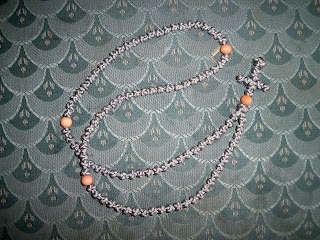 I've also got a couple of black Coptic/Ethiopian Mequtaria immediately available as well. Here are some picture of those. The larger one is 64 knots (I think), and the smaller is 40 knots (I think). 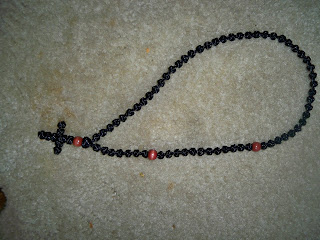 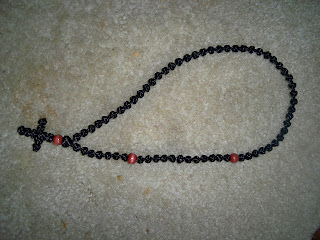 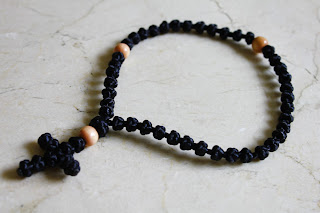 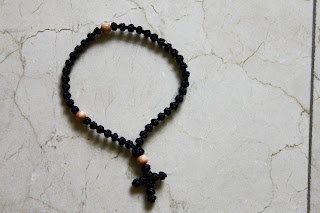 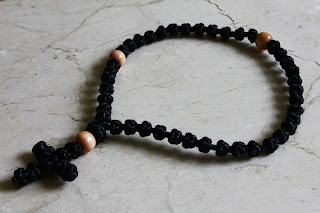 If/when any of these ropes sell I will immediately indicate them as sold directly below the photograph. If you like a specific style/color/bead combo but the rope you like has sold, simply send me an email and I can make another one for you. :) Peace and blessings to you all. May heaven consume us.
Posted by Phillip Rolfes at 9:07 PM No comments:

I know it's been quite some time since I've posted any meditations/thoughts on St. Ignatius Brianchaninov's work The Arena. I'm hoping here to start up again and provide a few more posts' worth of comments before finishing off the series.

Today he provides us with thoughts on bows and prostrations made during one's prayer rule. There are two things I find noteworthy right off the bat. First he only distinguishes two kinds of bow: one from the waist and the other a bow to the floor (a.k.a. a prostration). When he mentions bows from the waist he means this: "that when making it, the extended hand should touch the ground or floor." Those familiar with the Byzantine tradition will be quite familiar with such a bow. The right arm extends with the palm of the right hand facing out and one touches the floor with one's fingertips. This is often done before icons in one's parish church as a sign of reverence to those depicted in the image. If memory serves me correctly, such bows are also performed at the end of Compline in monasteries as one seeks the forgiveness of one's brethren before retiring to one's room.

Secondly St. Ignatius mentions that bows and prostrations are normally only performed at one's evening "cell rule" or evening rule of prayer. At first this struck me as odd. Why would prostrations be limited primarily to one's evening rule. But when one reads the evening prayers of the Byzantine tradition one immediately notices the emphasis on resisting temptations that attack us specifically when we retire to bed. Performing a number of bows or prostrations in the evening can help to tire the body out, thus making various temptations less appealing, and also making it easier to drift off into sleep. I remember while growing up on a farm I never had sleeping troubles. Especially after a hard day's work my head would hit the pillow and I'd be out like a light. Now that my labor is less physically demanding - and especially while I was in college - I find falling asleep to be much more difficult. Perhaps if I'd do a number of prostrations I'd have an easier time drifting off.

St. Ignatius, of course, mentions the need for the heart to be in tune with the movements of the body while one is making prostrations. Prostrations, he says, made simply for numbers and without the proper disposition of the heart are spiritually very dangerous, leading to pride and delusion. Instead we ought to have a strong conviction that when we prostrate ourselves, we prostrate ourselves in repentance at the feet of Christ. It is important for us to nourish that feeling of repentance, compunction, mourning and sorrow for our sins. "Progress consists in this," he says, "that the monk sees himself as the most sinful of all men."

He makes an interesting point that when one tires from prostrations one should pass over to bows.

The following advice is also given for discerning the number of prostrations and bows that one ought to perform during one's evening rule:

Regarding it as one's imperative duty in making bows to ensure the soul's abundant working which consists in attentiveness, unhurriedness, reverence, and the intention to offer penitence to God, the ascetic will soon discover the quantity of bows his constitution can stand.

Notice again that St. Ignatius is putting all the emphasis on one's attentiveness and interior disposition at prayer. Again, the quantity of bows does not really matter. Bows and prostrations are meant to be an aid to attentiveness. If they are not aiding one's attention then one risks the spiritual delusion that can lead to pride and vanity. But when we are attentive to our prayer while making our bows and prostrations, the number of bows of which we are capable will soon reveal itself. Interestingly here St. Ignatius recommend slightly reducing the number of bows of which we are capable as a concession to human weakness.

From here he says we ought to gain approval for such a rule from our spiritual father, or our superior, or from a monk whose advice we trust. For us living out in the world we could turn to our own spiritual directors, our parish priest, or some spiritual friend whom we trust. Again, the main thing in all of this is that one remain attentive at prayer and not become proud because we have performed a certain number of bows. Gaining approval from a spiritual guide or friend that we trust puts us somewhat in a position of obedience to them. Such obedience is the foundation of humility.

In a future post I hope to go off the beaten track a bit by providing some commentary from St. Theophan the Recluse. In his book The Spiritual Life and How to Be Attuned to It, St. Theophan goes into a great deal of detail on determining the amount of time one should dedicate to one's prayer rule. God willing - and provided I can get my library unpacked - I'll be able to get that post up in the next couple of weeks. May heaven consume us!
Posted by Phillip Rolfes at 9:36 AM 1 comment: